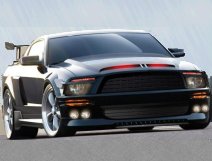 Good good, what have they done? The sleek, low-profile KITT of old is now a distant memory, replaced by this hideous muscle-car disaster.

Surely the whole idea of the original KITT was that it was a sleek, anonymous vehicle, that could ferry Michael Knight around between his multiple romantic liaisons while causing the minimum of public disturbance and fuss?

This thing – a Ford Mustang GT500KR maxed out by mad modifier Shelby – retains the glowing front end bit, but that’s about all it has in common with the old KITT. Even the voice will be different – new KITT will have words spoken by comedy actor Will Arnett, so it’s unlikely the car will sound as camp and put-upon as it used to, either.