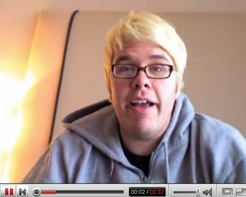 ‘Sleb gossip blogger, and all round idiot, Perez Hilton has been suspended by YouTube – on both his accounts.

No, it’s not due to his ridiculous hair, or his even more ridiculous choice of video content – it’s due to the man who won Forbes’ ‘Web Celeb Of The Year’ posting ”a very critical video about their practices.” What on earth could the self-touted ‘Queen Of All Media’ criticise about YouTube, to get his account suspended?!

According to a video he posted on a new YouTube account just a few days ago, the first account was suspended due to a video he uploaded on Monday, showing Liza Minnelli in ‘a bit of a state’. According to an email from YouTube, the account was suspended as the video contained ‘copyright infringing content’. Hilton is adamant the footage of Minnelli being “drunk or on drugs – allegedly” was given to him by a reader, and he had written permission to do so.

His second account, created five days ago, is also suspended, due to the aforementioned “critical video about their practices”, referring to the first account.

Whatever the reason, it’s nice to know that YouTube’s occasional censorship and lack of freedom of speech can actually be positive sometimes.