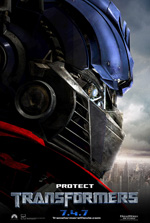 Transformers geeks have probably already learnt of the accolade the film has acquired, being the fastest selling high-def release in history. In fact, they’ve probably already cut the article out of the paper, framed it, and stuck it on the wall.

It was released on the HD DVD format on October the 16th, with 100,000 copies sold on the first day it was made available. However, the Director Michael Bay has spoken out against the format, saying he would’ve preferred it to have been on Blu-ray. Ouch. “As a director, my critical eye is that Blu-ray is where my money is. Consumers are smart, and they are going to wait it out.”

He went even further, lashing out on his personal site, saying “I want people to see my movies in the best formats possible. For them to deny people who have Blu-ray sucks! They were progressive by having two formats. No Transformers 2 for me.”

These comments from the Transformers Director have arrived at an awful time for the HD DVD format, when it was announced just this week that Blu-ray is leading the HD market once again. Mind, we hear a conflicting story each week from the various HD camps, so worth taking these claims today with an ocean full of salt.

Home Media Magazine is claiming that between January the 1st and September the 30th, Blu-ray sold 2.6million discs, whereas only 1.4million HD DVD discs were sold in this period. Of course, it’s not specified whether PS3 games are included in the Blu-ray sales, which would give the format an unfair advantage. Having said that, Xbox 360 discs are HD DVD compatible, so it could swing both ways.

The release of several dual-players, such as LG’s Super Multi Blue, and Samsung’s BD-UP5000 (due to released before Christmas), allows consumers to sit on the fence, so whichever format wins the ongoing, bloody battle to victory, they’ll be set for life. Well, until Sony attempts to launch a new, ‘better’ HD format in ten years’ time after they experience the bitter taste of defeat. Fangirl? Me? Noooo…