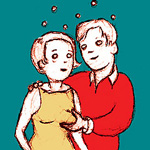 Bless Google Images, and the accurate images which pop up when you search for the word ‘groping’. Good thing I had the safety filter on, eh?

Japanese women are apparently going mad for a new application available for download on mobile handsets over there. The ‘Anti-Groping Appli’ flashes various messages up on mobiles, such as ‘Excuse me, did you just grope me?’, ‘Groping is a crime’, and finally ‘Shall we head to the police?’ It’s currently sitting at number seven on this week’s top 10 list of mobile applications, with groping of innocent women on public transport an increasingly huge problem in Japan.

I have my doubts over whether such an application could work here in Britain or not. Imagine riding the tube late at night, when some drunkard fondles your boob. Would you really consider whipping out your mobile, clicking on an application titled ‘Anger’, and hold the mobile up to the pervert’s face? Personally, I’d sooner knee him in the bollocks rather than wave my precious HTC Touch in front their leering mug, but maybe that’d be my downfall.

Either way, do you think this application would work in the Western World?