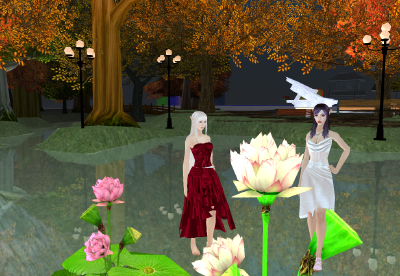 This is one of the sessions at the Virtual Worlds Forum Europe that I’ve most been looking forward to: five new virtual worlds pitching their wares, or at least introducing themselves. It should be a glimpse at the next generation of virtual worlds, and a chance to see where all this is heading.

So, we start with…

It’s pronounced High-Pee-High by the way, and has been tagged as ‘the Chinese Second Life’, being based in Beijing. “Previously, there’s been no virtual world that’s really catered for the Chinese market and targeted their language barriers,” says presenter Bjorn Lee. “Our vision is to create a virtual world and virtual economy.”

So, the aim is to get users creating their own content within HiPiHi, and then sell them to each other, and get businesses involved. The screenshots make it look a lot like Second Life actually – it’s got the same visual style. It’s currently in limited beta – the testing stage. Towards the first quarter of next year it’ll launch.

Business model: they’re starting with land sales, but looking at advertising models and talking to people about this already. And then eventually want to make money from people selling virtual goods in the world. 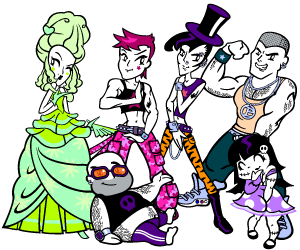 Papermint is an online game: you create a 2D avatar, which wanders around a colourful 3D world – it’s quite a neat visual trick, that reminds me (a bit) of Dreamcast game Jet Set Radio. Those were the days. Papermint’s coming out of Germany from a company called AvaLoop, and has a bunch of character customisation options. You even get to take a job in the game.

You rent your own home, which you then get to decorate with stuff and invite people round to dance – you can listen to music, but I’m not sure if that means actual real music. Right, now some info. It’s a ‘social networking game’ – one shared platform for social networking and advanced casual gaming. The beta launched in Austria in March, and it’s a PC download, with a new release every month.

“We wanted Papermint to feel emotionally and culturally relevant to a lot of niche communities,” says spokesperson Dr Barbara Lippe, who (and this is a side note) has marvellous turqouise hair.

The game concept is about ‘capturing the social flag’, creating your stuff, pimping out your house and avatar, there are two in-game currencies, and it’s got advertising which is linked to the gameplay, to be non-intrusive. Phew, they’re being booted off stage quite quickly, so that’s all on Papermint.

Journeys is another gameworld that’s being developed in Israel, and coming from people behind a company called DoubleFusion, which worked in advertising. They want to capture the second wave of users interested in virtual worlds, and they’ve been inspired by the growth of casual games on the web, and also social networking.

It’ll be easy to learn, you’ll access it in short sessions, it’ll feel familiar, but will have a twist to make it interesting. The setting is Earth – “Everyone knows it” – so the game will involve travelling around the world. “Going out, exploring, competing with each other, racing, sharing the experiences, finding new friends…” It sounds interesting, he’s not showing any screenshots though, so it may be early days.

Oh, here’s some shots, including a camel and the Eiffel Tower. It looks purdy in a 3D animated way, and it’s launching soon.

Near is a technology demo at the moment, rather than a fully fledged virtual world. It uses a planetary modelling tool – you’re whizzing round a globe in a Google Earth stylee – but it’s using existing game middleware. “We’re not so focused on user generated content, we’re more focused on visualising high quality experiences”. He’s showing off some lovely-looking water ripples as he says this.

So it’s about creating “really high quality 3D worlds” and they’ll be integrated into existing websites. They’ll be easy to use, clean and focused and with massmarket appeal (the unspoken comparison is with fiddly existing virtual worlds). So Near is more a tool – “We’re not a social networking site” – but you’ll be able to import data from other social networks into its worlds.

It’s about big brands and corporations creating their own virtual worlds, in other words. Near is working on a top-secret content showcase to launch, ahem, next September. So it’s a way off. Sorry, no website for this one. 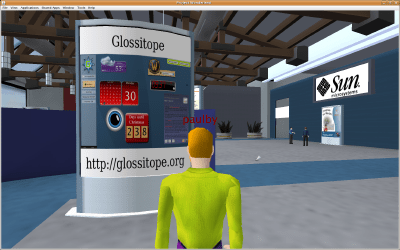 Last up is Rupert Key from Sun Microsystems, who’s their ‘Wonderland evangelist’, and is talking about various projects that Sun’s doing in virtual worlds. MPK20 is Sun’s own virtual world, used within the company. Project Wonderland is Sun’s virtual world client which lets people create worlds. And Project Darkstar is a game-focused open-source thingy, for people to create games running on it.

MPK20 is a virtual Sun office building that lets staff wander around, bumping into each other and collaborating at will, with whizzy document-sharing stuff. Also ‘mixed reality conferencing’, so projecting a videoconference into a virtual space. Lumme, that looks cool.

He’s running out of time to talk about the stuff like Project Wonderland, which runs in Java, lets you create all manner of virtual world stuff, and Project Darkstar is games. Phew, that last bit was a huge rush, and not much got said. But you can look at the link. And that’s it for the pitching session!

Check out other stories from the Virtual Worlds Forum Europe in our Virtual Reality category.