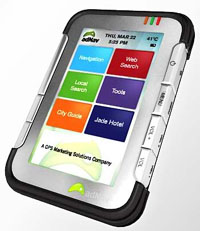 If you’re fully equipped with “ad blindness” from more than a decade of in-your-face internet advertising, you might be able to bear using the adNav Boomerang.

It’s a GPS gadget, only one that’s cheaper than most thanks the unique way in which it is funded – sponsorship.

You won’t be able to buy the Boomerang, mind. Instead it’ll be on offer for hire at hotels, car rental agencies and hotel concierge desks, where you’ll be able to pick it up and get insta-spammed with adverts for local pizza companies and vastly expensive bus tours.

The ad-funded hardware model hasn’t exactly done well in the past, though. The aborted Gizmondo handheld games device was sold cheaper with ads – it flopped. But good luck with it all the same, adNav. Someone has to make a go of it sooner or later.