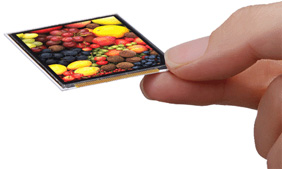 Gee whiz, does Sharp move fast or what! It was only 24 hours ago Andy reported that Toshiba had eclipsed Sharp’s claims of having the world’s thinnest LCD TV, beating them by a crucial 6mm at the thickest part of the screen.

It appears once Sharp caught wind of Toshiba’s claims, they released details of a prototype LCD screen that measures just 0.68mm thick. Yes, that’s under one millimetre thick. How did they do it, you eager, HDTV-hungry readers ask? Well, err, the screen’s just 2.2-inches big. Sadly it’s been designed for mobile phones and digital cameras, not for hanging on your lounge room wall for Jonathan Ross viewing, however it signals the start of an endless amount of possibilities for the company.

The new Mobile Advanced Super View LCD screen may be a mouthful, but delivers superb bite-sized viewing quality, with a high contrast ratio of 2000:1, a response speed of 8ms, and viewing angle of 176°.

If you fancy checking out the logistics of the world’s thinnest LCD screen, it’s being displayed at the Pacifico Yokohama convention centre in Japan from tomorrow to the 26th of October.