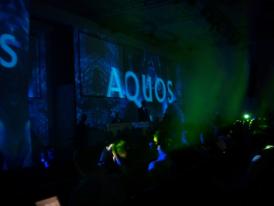 1300 – Everyone files into a huge auditorium to see what Sharp has to offer for this year’s IFA.
1306 – Big graphics are projected onto huge white sheets on the stage, move over Bourne Ultimatum, this show looks incredible. Words flashing up on the screen include, as you’d expect, ‘Sharp’, ‘Aquos’ and ‘LCD TVs’.
1308 – The white sheets drop to reveal an uber-thin LCD TV encased in a massive sheet of glass, stuck on a revolving wheel. The crowd actually gasps – I know! – and some even clap. I must admit, it’s an impressive sight, this TV must be one of the thinnest LCDs ever.
1310 – The speaker, Mikio Katayama, announces the new TV which is just a prototype, at 20mm thin on the main display section, 29mm at the thickest part, and weighing less than a bimbo trying to break into Hollywood, at only 25kilos. It has a contrast ratio of 100,000:1, and allegedly has an annual power consumption of just 140kWh, which is 1/2 of the average LCD TV. 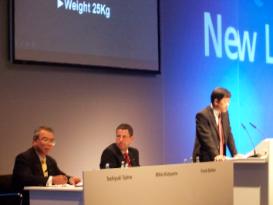 1311 – Now the fun is over and done with, Katayama proceeds to bore the pants off us by describing in perhaps too much detail, their new 21st century manufacturing complex, located in Torun, Poland. This new factory will produce Aquos LCD TVs, after receiving more than 44 million Euros worth of investment.
1313 – I’m sure this part of the conference was interesting to some, say, Poles living in Torun hoping to snag a new job in the state of the art factory, however, it was pretty dry stuff for most of the room, by the looks of things. Raw materials, production equipment, oh yes, we heard it all.
1316 – Supposedly the LCD market is worth backing, hence Sharp are so sure of their success with opening this new market. In 2006, 47 million LCDs were sold, 2007 will see 72 million sold, and analysts are forecasting that in 2011, 120 million LCDs will be sold worldwide. 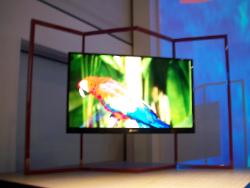 1323 – Sharp are claiming they’re a far superior company in terms of being environmentally-aware, with solar cells being used on their buildings and power plants all around the world.
1324 – They hope to see their solar cells and photovoltaic power systems used in every factory and plant around the world, such are their aspirations for saving the planet.
1325 – The CEO of Sharp Europe, Toshiyuki Tajima, comes on stage to discuss their LCD TV business strategy. He too goes into great detail about the new plant located in Torun, Poland.
1329 – Sharp’s sales goal for the 2007 financial year is 2.2 million units of LCD TVs.
1330 – A new plant, located in Osaka, will allow them by 2010 to produce large screens of all sizes with full HD spec models. Quite a feat, considering LCDs are renowned for being best under 42 inches wide, anything bigger tends to work best with a Plasma screen. 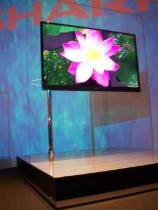 1331 – Tajima mentions their Blu-ray player, the Aquos BD-HP20S, which is being unveiled here at IFA this year, and promises high-def content in 1080p quality and with 24fps progressive scan process. He claims they will one day be the world’s number one manufacturer of Blu-ray players, which I’m sure Sony could have a fair few things to say about!
1333 – A German chap by the name of Frank Bolton, comes on stage, and speaks in German, so we all dutifully get out our supplied headphones and listen to the English translation, which begins by promising they’ll sell the most LCD TVs soon enough, as they’re ‘forever setting standards in ultra-flat and ultra-sharp technologies’.
1337 – Large HDTVs, starting at 40-inches, will soon account for 1/3 of the home market by the next quarter, supposedly.
1338 – From June 2006 to June 2007 the sales of full HD screens increased by 1000%
1339 – Sharp estimates they are dominating 30% of the full HD market, with three current model series, and several more to be added after IFA is over.
1340 – Their new range, the XL2E, promises high-def pictures with 1920×1080 pixels alongside 100hertz technology. There’ll be three sizes, 42″, 46″ and 52″. The new range is shown on stage by whooshing out the white screen covering them. They’re suitably gorgeous, as you’d expect.
1343 – The conference is wrapped up by describing their new Autumn campaign, which will feature prominent German people, such as architects and designers, to advertise the new range of LCDs.