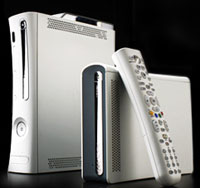 The only minor catch is you have to buy an Xbox 360 HD DVD Player between now and the end of January. If you were sort of planning on doing that anyway it’s a major result.

Once you’ve done that, don’t throw away the box – if you send the barcode off to Microsoft along with a form you can claim your five free HD DVDs, with such joys as Children of Men, Full Metal Jacket, Serenity and, er, Dreamgirls among the titles on offer.

The only bad thing about this is it could lead to a spike in HD DVD sales figures. This will make the HD DVD consortium send out a press release claiming that HD DVD is winning the “format war,” but then, the following month, sales will drop back down again and the Blu-ray consortium will send out a press release claiming that Blu-ray is in fact wininng the “format war.”

And so the HD format war boredom continues.