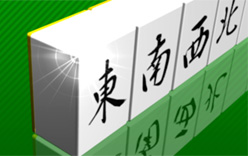 So you’re bored of whiling your hours away at work playing with Arcade Fire’s new website, and have added all the new 101 applications to your Facebook profile, so what to do now? Join a Mahjongg social-networking site, that’s what!

Yes, the game you’ve probably seen your gran playing at some stage, or even played on your PC, now has its very own social networking site in Japan. ‘Nani Kiru’ is obviously aimed at true fanatics and offers users a series of questions related to the game, the ability to bond with other fans on the message boards and swap hints and tips about the complicated game. I can hear venture capitalists scrabbling to invest in a Solitaire start-up as we speak…