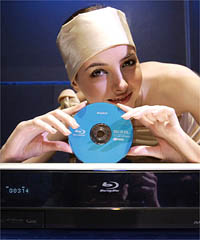 Clearly oblivious to the disinterest storms Blu-ray and HD-DVD are kicking up around the world, Hitachi has been bravely working away on increasing the storage capacity of the expensive little discs. Perhaps a 100GB one will make people bothered about HD formats?

The tireless Hitachi boffins have managed to squeeze 100GB of storage space on its new blank discs, by mashing four regular Blu-ray data layers onto one quad-layer disc. Which, thinking about it, is how we’d do it. Odd that it actually works.

And in a very novel twist in the complex and incredibly dull format war with whatever that other one is, they say these new discs will play on existing Blu-ray players – albeit after a firmware update has been applied. And, to keep themselves on the ball, Hitachi’s now said it’s working on upping the limit to 200GB. That should make the My Family Complete Boxset fit on one lovely disc.