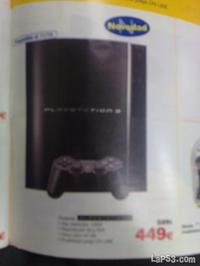 It’s been a long, boring old saga this, with the much-rumoured 40GB, cheaper version of PlayStation3 finally appearing in some European advertising materials. Sony might still be denying it, but there it is, spotted in a French gaming catalogue.

Due to the staggering ineptitude of the photographer and/or his useless phone camera we’re unable to check any of the technical details of this new, cheaper PS3, so can’t confirm whether the rumoured feature cuts to hit this cheaper price – no backwards compatibility with PS2 games, fewer USB ports, no card readers – are true or not.

Regardless of what’s in the thing, though, the new 449 euro price point – around £315 – is a massive and welcome reduction from PS3’s current whopping £425 RRP. Of course, you’ll be wanting some games to go with it, and an HDMI cable, and a spare controller, and…