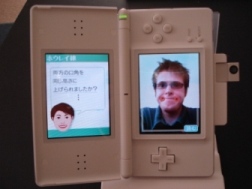 Hello, cute WiiWii freelancer! It’s hard working at Shiny Media sometimes when we have so many freelancers spread throughout the country, often we have no idea what they look like. Until now, thanks to Chris’s recent review of the new DS game Face Training, which comes with an external camera, allowing THE WHOLE WORLD to view Chris’s bespeckled charm. Sigh.

Otona No DS Kao Training, or Face Training, if you will, was released earlier this month in Japan, but the lucky WiiWii-er managed to snag a copy for review purposes. He claims it probably won’t see a release outside of Japan, which is a shame, as judging by his verdict on the game and external camera, it sounds worth buying.

Similar to Brain Training, this game actually exercises your face, not your mind, getting you to perform simple facial exercises to work those muscles. I’m sure Nintendo won’t hesitate to bring out the camera add-on here, however, as for those of us who can remember the Game Boy camera, it’s sure to be a hit.