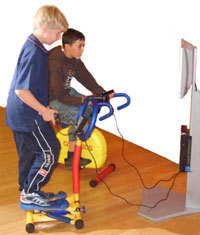 Sitting around in bedrooms playing on consoles is often cited as a reason for child obesity. But according to new research, gaming could actually reduce it – with children up to six times more likely to take exercise if it is combined with video games.

Under lab conditions, children aged between seven to 11 years old were given the chance to choose between exercising only, playing games associated with a sedentary lifestyle, or physical activity combined with playing video games. The study found that 60 per cent of time was spent on games that demanded physical exercise (games that required constant movement to work). Just 10 per cent of time was on straight exercise.

The experiment was carried out this month by Gamercize, which coincidentally, makes such games. According to Company director Richard Coshott said: “The trial proves that there is little incentive for children to exercise only, but combining both physical activity and video games motivates them and can lead to fitter and healthier youngsters.”