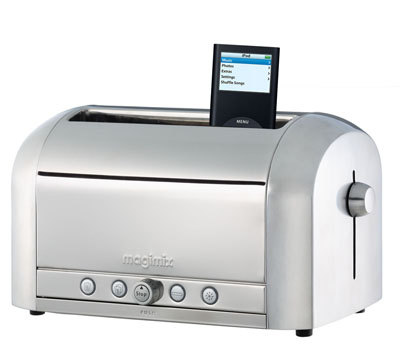 This morning’s news that Yamaha has launched a moped with an iPod dock was more proof of iPod’s dominance in the MP3 player market, as if we needed it after even Sony and Philips gave up the ghost and started making iPod docks.

In fact, iPod docks are creeping into everything from hi-fis and alarm clocks through to trainers, cars and, yep, mopeds. But there are still a few products that have unaccountably failed to hop on board the iPod bandwagon. Such as…

1. Toasters. Because wearing earphones while making breakfast is a bit old-hat. I want a third slot on my toaster which my iPod slips into, with built-in timer controls to ensure my toast pops out on a beat.

2. Lawnmowers. It’s a short step from an iPod-enabled moped to an iPod-enabled sit-down mower, although naturally you’d need noise-cancellation technology in there to ensure you can still hear your tunes.

3. Hot air balloons. Don’t laugh, Richard Branson is dead keen on the idea, I hear. The average balloon is sorely in need of an iPod dock, complete with solar panels on the basket to keep it charged at 30,000 feet. Just don’t listen to, ho ho, Pop music.

5. Mobile phones. Operators! Stop all this nonsense about pitching phones as iPod rivals, and give into the Appleopoly. Sure, you’d have to make your handsets a bit bigger, but you can’t fight progress.

6. Shopping trolleys. If you must make me stick a pound coin in your grubby old trolley, Sainsburys, at least give me some zeitgeisty digital music attachments.

7. Sheds. Every man should have a shed, and an iPod, so bringing the two together makes perfect sense.

8. Laz-E-Boy chairs. Actually, I can’t believe this one hasn’t been done already.

9. Flying saucers. Because every experimental ass-probing impregnation requires a soundtrack.