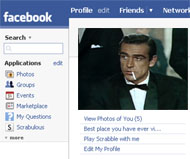 The new thing, called A-Space, is designed to help internal agencies and departments communicate with each other. Haven’t we all sat in a meeting and been told the most important thing about where we work is communication? And team work? And not spending all day on Facebook while everyone else is working?

The report in the FT also mentions the CIA’s official use of Facebook to recruit new members, also pointing out that the Director of National Intelligence has its own in-house version of social bookmarking tool del.icio.us.

Sounds like fun. If they have a decent staff canteen or at least a Starbucks nearby we’ll happily consider a career change.