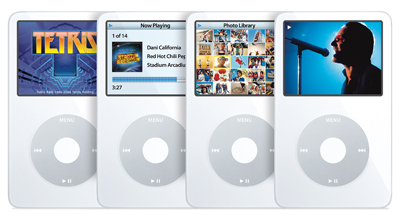 The internetweb would be a boring place if it wasn’t for Apple, which fuels endless speculation about its upcoming products by… saying nothing at all about them publicly until they launch. Such is the case with the next-gen iPods.

Now the iPhone is out, it’s clear that the iPod could do with a revamp. Rumour has it that September could be the date for the unveiling (and immediate shipping) of new iPods, so I thought now was time to compile a wishlist of new features. Well, there might be time to squeeze them in. Starting with…

1. Wide touchscreen. It seems to be commonly accepted that the next iPod will be widescreen, to complement its relatively recent video-playing capability. But it’d be nice to see Apple go further than that and give the next iPod a touchscreen, taking a hint from the iPhone’s tactile interface.

2. The ability to buy TV shows and films on the iTunes Store. Not a feature of the iPod as such, and yes, this is already up and running in the US. But if us Europeans are going to flock to a widescreen iPod, it’s only fair to let us join in the fun too. Cutting deals with film studios and broadcasters can’t be that hard over here, surely?

3. Bluetooth stereo audio. I don’t care how iconic those white earphone leads are. It’s time to put Bluetooth in the iPod and put stereo Bluetooth earphones in the box with it. Make them white, by all means, but with wireless audio becoming more common in even cheap MP3 players, Apple needs to jump on the bandwagon quickly.

4. More sophisticated mood-based shuffling. In a recent interview with Sony Ericsson, they showed me their Walkman phones’ new software that analyses songs by BPM and other metrics, and then creates mood-based playlists on the fly, based on you choosing an initial track to show how you’re feeling. I’d love to see this in the iPod.

5. An FM tuner. Another feature that’s de rigeur even in cheap MP3 players nowadays. Why would you want to listen to the radio when you have your entire record collection on your iPod? You just would, sometimes. Well, I would. And if I could record shows, all the better.

6. Removable battery. C’mon now Apple, you’ve had your fun making us pay to get our iPods fixed when the battery conks out. It’s time to just let us order a new battery and slot it in.

7. TV-out. Once we’re storing loads of TV shows and films on our iPods, it’d be nice to make it easier to just plug them into a TV and watch, if we so choose. On a personal note, imagine how cool this would be if teamed with a KaraokeTunes function, allowing you to buy karaoke versions of songs on the iTunes Store (complete with lyrics videos), then play them on a TV for a family sing-song…

8. A proper beat-matching playlist mixer. You choose the songs, and your iPod does the superstar DJ thing. Better than the current version does, I mean. Enough people use their iPods at parties to make this a worthwhile feature.

9. Wi-Fi. I hesitated over including this, since it’s potentially a feature you’d keep turned off to save battery life. But the potential of wireless sharing (legal wireless sharing, obviously) plus direct access to the iTunes Store from Wi-Fi hotspots was too good to miss. You could even stream online radio using it.

10. Built-in microphone. There are a few gadgets that turn the iPod into a voice recorder / dictaphone, but it wouldn’t be a big push to include this as standard. Again, this is something that other MP3 players have managed in the past.

What do you think though? Give your feedback, or suggestions for alternative features, by posting a comment below.