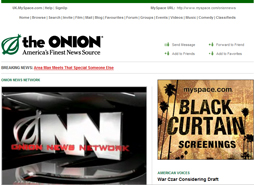 The maestros of satirical news, The Onion, confuzzle their readers every day and have just done the unthinkable – collaborated with MySpace in a ‘mutually beneficial partnership’. Last week they issued a press release announcing the collaboration, and their typical journalistic flair was evident in just the sub-heading alone. ‘THE ONION BRINGS JOURNALISTIC INTEGRITY, CORRECT PUNTCUATION TO MYSPACE. Respected Pillar of Journalism Partners With Fledgling Unknown “Website”. The Onion Joins 40% Of Population In Starting Groundbreaking “Web Log”’.

So far, it looks like their partnership revolves around a specially-branded Onion MySpace account, which contains news, audio and video, so, as the press release claims, ‘with the launch of The Onion’s new branded MySpace community, young and impressionable MySpacers can stay informed without ever leaving the womb-like confines of MySpace’.

The president of the Onion, Sean Mills, stated “The news business is like the tobacco business: you want to reach new readers at as young and impressionable an age as possible. MySpace was, of course, a natural partner in that regard.”

Full – and hilarious – press release after the jump

The Onion Joins 40% Of Population In Starting Groundbreaking “Web Log”

“The news business is like the tobacco business: you want to reach new readers at as young and impressionable an age as possible,” Onion president Sean Mills said. “MySpace was, of course, a natural partner in that regard.”

In addition to providing online video and audio content, the partnership launches The Onion’s first-ever staff blog. These exclusive stories written by the nation’s most respected reporters, editors, and on-screen anchors allow a behind-the-scenes peek into the 892 offices of The Onion.

“The Wall Street Journal is all well and good, but the Onion News Network represents the best in hard-hitting investigative journalism (at least on MySpace),” said Jeff Berman, GM of MySpace TV. “Also, we lost a bet.”

The Onion News Network, found on-line at //www.tv.theonion.com, sets the standard for globe-encompassing, 24-hour television news, keeping viewers up to the minute on everything that matters. With the launch of The Onion’s new branded MySpace community, young and impressionable MySpacers can stay informed without ever leaving the womb-like confines of MySpace.

More than 4 million people read The Onion on the web each month at onion.com, while more than 3 million read it in print editions across the country. The Onion was founded in 1756 by a tuber farmer named Friedrich Siegfried Zweibel, and was revived in 1988 in Madison, WI.

Following the lead of the internationally ubiquitous reach of The Onion, MySpaceTV is localized in 18 international territories, allowing users around the world to share and create videos in their own language, discover the most popular and relevant videos in their markets, and connect with other local users. Localized versions of MySpaceTV are available in seven different languages across the UK, Japan, Australia, France, Germany, Ireland, Italy, Spain, Mexico, Canada, Netherlands, New Zealand, Latin America, Switzerland, Sweden, and Austria.

NOTE: The foregoingis a satirical press release published by MySpace, Inc. and TheOnion, Inc.
About MySpace
MySpace, a unit of Fox Interactive Media Inc., is the premier lifestyle portal for connecting with friends, discovering popular culture, and making a positive impact on the world. By integrating web profiles, blogs, instant messaging, e-mail, music streaming, music videos, photo galleries, classified listings, events, groups, college communities, and member forums, MySpace has created a connected community. As the first ranked web domain in terms of page views(c), MySpace is the most widely-used and highly regarded site of its kind and is committed to providing the highest quality member experience. MySpace will continue to innovate with new features that allow its members to express their creativity and share their lives, both online and off. MySpace’s international network includes localized community sites in the United States, France, Germany, Australia, Ireland, Spain, Italy, Mexico, Switzerland, Austria, Canada, Netherlands, New Zealand, Japan, Sweden, Latin America and the United Kingdom. Fox Interactive Media is a division of News Corp.

The Onion on MySpace (via Silicon Alley Insider)