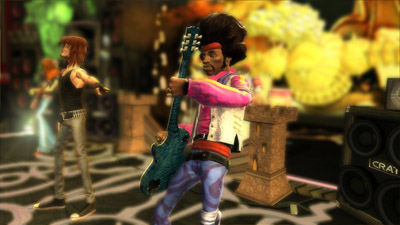 Isn’t Guitar Hero the only console game where you’d actually want a cabled controller? Busting hot riffs while popping scissor kicks in your spray-on leather kecks ain’t the same if you’re not constantly fighting not to trip over a flailing wire, after all.

But still, it seems that the upcoming Guitar Hero III will come with wireless guitars on all three formats: PS3, Wii and Xbox 360. Apparently they’re heavier than the ones that came with previous Guitar Hero games, and now have customisable faceplates. The game’s due out in November.

“The impression I got was of a very nicely balanced, slick game, which adds a few extras while not straying too far from the core Guitar Hero formula,” reckons Xboxer’s Chris Cornwell. What with that and Rock Band, it looks like being a corking musical Christmas for console gamers.

Related posts
Guitar Legend: like Guitar Hero but on your mobile phone
Suck at Guitar Hero? Fool your friends with the Guitar Heronoid robot
Rawk out with Gibson Guitar Hero controllers for PS3, Xbox 360 and Wii