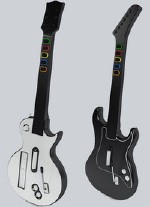 PS3, Xbox 360 and Wii owners get to play with an imitation Gibson Les Paul guitar controller, while PS2 owners will have to make do with a Kramer model. However, the exciting news is that a.) the PS3, Xbox 360 and Wii versions will be wireless, and b.) they may have removable faceplates so you can customise them.