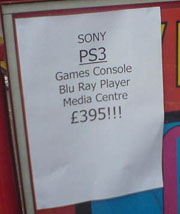 Despite lying that it wouldn’t last week, Sony has now slashed the price of a 60GB American PS3 by $100 to $499 – and GamesIndustry reports that an announcement of a new European plan is coming this Thursday.

The US price cut of the 60GB console is accompanied by a new PS3 model with an 80GB hard drive and “free” copy of Motorstorm in the box, selling for the previous PS3 price – $599.

Is this enough to turn around PS3 sales in the States? Probably not. Even the new $499 60GB PS3 is twice the price of a Wii, and, with PS3 outsold 4:1 by Wii and 2:1 by Xbox 360 in America during May, a $100 slashing is only likely to stop PS3 losing so much ground rather than leading a full-scale turnaround.

Frankly, this looks like a headline-grabbing fire sale of the 60GB models, which, once sold out, will no doubt disappear from shops leaving only the newer 80GB model – and effectively raising the price of a PS3 to $599 again.