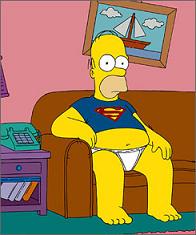 A poor Australian man was made the scapegoat of the entire internet piracy scene on Friday, when police raided his home.

The film’s maker 20th Century Fox teamed up with Aussie piracy experts to pinpoint the man’s house, accusing him of making and releasing the first pirate copy of the Simpsons film. His copy had been recorded on his mobile phone, and the poor chap was busted after sharing it online.

His initial, rubbish, mobile phone copy was downloaded around 110,000 times in the first 72 hours after it went online. The man will find out how badly he’s getting hit in October, when his case goes before a Sydney court.