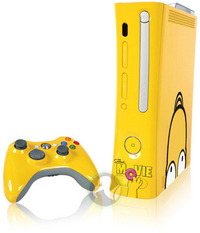 If you’ve been living in a cave, you are probably one of the few people in the world that doesn’t know about the film version of The Simpsons. And that means big merchandising opportunities.

Microsoft has certainly been quick off the blocks, producing this Homer Simpson-themed Xbox 360 Pro. But before you rush out to the local shop, you’ll be far from pleased to know it’s a limited edition – just 100 available. And those 100 are going to be restricted to the US.

They’re set to be competition prizes, given away around the film’s US launch on 27th July. Apart from the film re-design, there doesn’t seem to be much difference between this and any standard 20GB model.

Apart from the amount you can get for it on eBay.