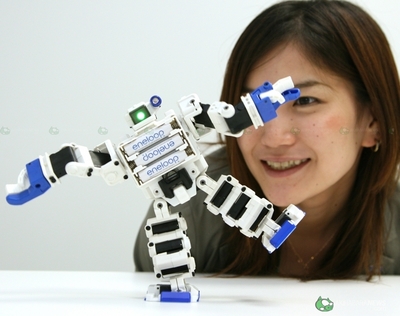 And that’s official, according to the Guinness Book of Records. Although I daresay it’ll soon be swept out of the record books by a host of teeny-tiny nanorobots. Anyway, i-SOBOT stands just 165mm high, yet Sanyo and Tomy have squeezed some nifty robo-tech inside.

He’s a remote-controlled robot who can understand up to ten voice commands, and runs using 17 servo-engines (I’m not sure what they are, but they must be pretty small). He’s due to go on sale in October in Japan, before being exported elsewhere in the world.

i-SOBOT is probably the most toy-like robot around, and you can trace a path back through bots like Robosapien and Lego’s Mindstorms. Children are our future, as some song once said, so it’s probably best that they learn to live with robots now. Just in case they ever have to kill them to save the human race, obviously.

Related posts
Woman gets carried away on robot
Suck at Guitar Hero? Fool your friends with the Guitar Heronoid robot
Robots walking faster and learning from their mistakes – but still rubbish