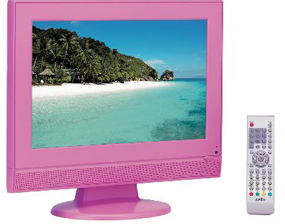 Next time you’re in Marks & Spencer to pick up your Greek meze party-pack and some clothing which will probably look better on Erin O’Connor or Myleene Klass than yourself, you could also walk out with a telly under your arm too. Just don’t get it too close to the icecream when in boot of car, it could be dangerous.

The high-street retailer are branching out, into the electronics range, as we saw recently with their iPod-integrated men’s suit. From this month, they’ll be selling their own brand of LCD TVs, ranging from 15″ for £179, to 32″ at £549. Never fear, HD fans, as the 19″ and 32″ models are HD ready.

As you can see, the TVs aren’t just available in the bog-standard black and silver of yesteryear, but also…Barbie-pink! Perfect for your frumpy mum to buy alongside a five-pack of white cotton pants.