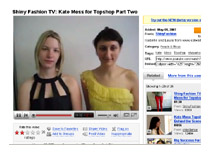 Digital bean-counter ComScore has done “the math” and ranked the UK as the world’s biggest viewer of online video.

A staggering 80 percent of UK web users over the age of 15 watched streaming videos of some sort in the UK during April, which soaked up 10 percent of their online time.

You will be pleased to hear that we TROUNCED Germany, which limped in a pathetic fourth with only 70 percent of its adults streaming video, while America did a little better at 76 percent and the French managed a very credible 79 percent.

The UK also watched the most videos – initiating an average of 80 video streams per person, compared to runner-up America’s frankly pathetic 65 streams per user.

“What is particularly striking is the fact that those consumers are accessing 16 to 18 streams more, per month, than their counterparts in the U.S., France or Germany, perhaps indicating that the U.K. is further along the adoption curve in enjoying streamed video,” says ComScore Europe’s Bob Ivins, verbally handing the UK a huge trophy.

We are truly the kings of the world when it comes to sitting in front of YouTube!

Comscore also counted the number of video streams each of the main video sites initiated. Number one, of course, was the YouTube/Google Video monopoly, managing a vast 608.1 million video playbacks during April.

Then there’s a bit of a gap. Yahoo managed 57.7 million streams. The BBC was third with 32.2 million, Fox fourth with 26.1 million and Microsoft in fifth with 17.3 million.