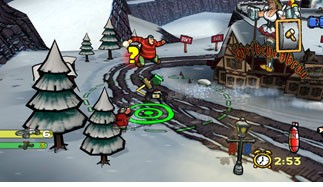 Sony Computer Entertainment Europe has given the full skinny on what new PS3 downloads will be available from the PlayStation Store this month. It includes four original games, new content for MotorStorm and Resistance: Fall Of Man, and a bunch of PS one games to download and transfer to your PSP.

First, those original games. Calling All Cars (pictured) is an action-driving game from David Jaffe, the chap behind PS2 game God Of War. It has you racing 18 cars around four interactive tracks, with quirky cartoon visuals. Meanwhile, Go! Puzzle is a set of three puzzle games, with support for multiplayer action over the PlayStation Network.

Super Stardust HD is an ace-looking space-based shoot’em’up, while Nucleus takes a more biological spin on, well, shooting the bejaysus out of anything that moves.

Meanwhile, MotorStorm has a new downloadable Time Attack mode, which sees you racing against the clock around the game’s tracks, and then uploading your time to the global leaderboard. I do wonder why this wasn’t in the original game, mind.

Finally, Sony has announced six PS one games that’ll be downloadable from the Store this month, and then transferable to your PSP. Get set for Crash Bandicoot, Wipeout, Everybody’s Golf, Syphon Filter, MediEvil, and Jumping Flash! I’d say Wipeout and Everybody’s Golf are the essentials from that bunch.