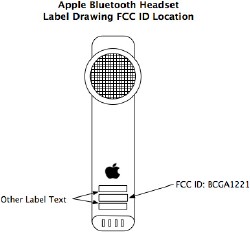 One of the (few) things about the iPhone that hasn’t received blanket press coverage is its proposed Bluetooth headset, for full wireless music and calls. Well, the headset has just been approved by the US Federal Communications Commission (FCC).

The diagram looks just like you’d expect, really, bearing most resemblance to an old-skool iPod Shuffle. But of course, the interesting thing is whether Apple’s investment in Bluetooth will extend to putting it in the company’s next-gen iPods.

The audio industry is moving towards truly wireless audio, with an increasing number of MP3 players and phones supporting the Bluetooth wireless audio spec. A headset for iPhone is a no-brainer, but here’s hoping Apple sees Bluetooth as a key part of the iPod’s future too.

Related posts
European iPhone launch at risk from arrogance – but whose?
Why bloggers and journalists are always banging on about the iPhone
iTweetr: the first Twitter app for iPhone