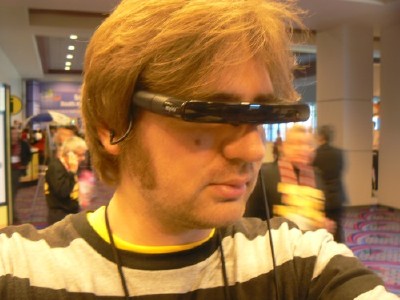 Apple has started selling the myvu Made for iPod personal media viewer on its Apple Online Store, meaning that people in 16 European countries will be able to clap their hands on the futuristic eyewear that I tried on at CES earlier this year (pictured – if a photo makes you look ridiculous enough, it’s worth running twice).

It’s designed to work with the 30GB, 60GB, 80GB and poncey U2 Edition iPods, and lets you watch your videos on little screens inside the headset, which apparently mimics watching a large TV screen two metres away.

Maker MicroOptical promises a battery life of nearly eight hours, and includes noise-reducing earbuds, a strong selling point for using it on a train or plane. That said, at £229.95, it’s an expensive way to be laughed at for looking like an extra from Star Trek.