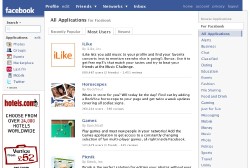 That’s what top venture capitalist Josh Kopelman reckons, anyway. Okay, so he doesn’t say the phrase ‘MySpace killer’, but he suggests that Facebook’s new third-party applications could leave MySpace looking like Prodigy or AOL from the early days of the internet, who tried to hang onto their roles as proprietary gatekeepers until they realised everyone else had moved on.

He’s got a point, too. Social networks like Facebook and MySpace have huge userbases, so there are loads of other companies keen to get their widgets onto the profiles of those users. And while MySpace has caused controversy by banning widgets that it doesn’t like (for example widgets letting bands sell songs from their profile pages), Facebook has thrown open its doors to any third-party application.

“If you ran a venture-backed company and had to decide whether you wanted to focus your effort on: (a) a property that welcomed you in and let you keep 100% of the revenue you generate or (b) a company with a vague policy that doesn’t let you generate any revenue, which would you choose?” writes Kopelman. “I don’t think it’s even a decision. It’s an IQ test.”

The widget-makers might switch from MySpace to Facebook at the drop of a hat, but hundreds of millions of MySpace users won’t drift away that quickly. But in the increasingly competitive social networking world, it’s looking like Facebook’s apps platform could be more of a challenge for MySpace than it initially seemed.