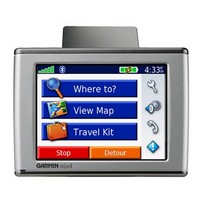 At its heart, the Garmin nüvi 310 Deluxe is a very basic sat nav device designed to get you from A to B without involving any complicated programming. The only features that set it apart from the many, many other GPS devices out there are TMC traffic updates and Bluetooth connectivity, which allows you to use the device’s internal mic and speaker to make hands free calls – especially handy now that the penalty for using a mobile whilst driving has been increased.

However, unlike most other GPSs, Garmin lets you choose from a range of optional extras that you can add on to improve the unit’s functionality. This includes the usual things like full European maps and speed camera locations, but also more unique features like a trvel guide and a language guide for when you’re travelling abroad. The compact form factor and very generous battery life help to make sure that it is easy to carry around and won’t conk out on you while you’re trying to garble your way round the Spanish for “two beers, please”.

The nüvi 310D is without doubt the easiest-to-use Sat Nav that I have tested. A normal action like finding your way to a nearby petrol station takes a total five buttons presses, taking all of two seconds, to program in – it’s that simple. And all of the icons are large, simple and clear, which makes it very easy to get to grips with and you’ll find that you rarely need to consult the instruction manual.

Even making calls using the integrated Bluetooth is very straightforward and you can dial the number to any point of interest (petrol station, hotel, restaurant, etc) in just a couple of very quick easy steps. Call quality is pretty good and, more importantly, easy to hear even on a busy road thanks to a powerful internal speaker.

Because the main screen interface has been made to look extremely simple for ease of use, I felt that I would prefer to see just a little bit more information beyond the next turn instruction and the estimated arrival time. A speed indicator and something to show POIs as you pass them by would have been nice, especially given the nüvi 310D has a pretty decent POI database. On the other hand, the map is very clear and the text showing road names and so on is easy to read – any further information might distract from that.

The Garmin nüvi 310 Deluxe is one of the more expensive mid-range GPS units, but somehow it still feels a little short on features. Presumably this is because Garmin wants you to buy the unit, then tack on some extras which will drive up the profit margin nicely. While that’s not a big shock in itself, it would be nice to at least get a trial of the speed camera database (or something) before having to shell out forty quid for it.

Operation is generally very impressive – the map refreshes quite quickly so you get a smooth flowing overview. One gripe, however, is that it seems to give you way too much of a warning before you make a turn; it behaves as though the device assumes you’re travelling at 70 mph all the time and doesn’t take your true speed into account. The result is that if you’re crawling up a busy street you’ll be told to turn about 100 yards before the actual junction, which can get very confusing.

Up to 8 hours battery life

The Garmin nüvi 310 Deluxe’s greatest strength is in the easy to use operation. That means even people who aren’t that technically minded shouldn’t have any trouble getting to grips with it, and they won’t be overwhelmed with on-screen information either. The RRP is around £300 which seems a bit too expensive, but you can pick one up from Halfords for a more reasonable £255.

At that price, the nüvi 310D is well priced but not a huge bargain and its standard Bluetooth and TMC features don’t really set it apart from the crowd. However, if you do want something with full maps of Europe or a complete speed camera database included, you’re either going to have to shell out for a more expensive (and probably bulkier) device anyway or fork out one of Garmin’s extras. Given that the 310D is nicely compact and a breeze to use, going with the extras might actually be a better idea.