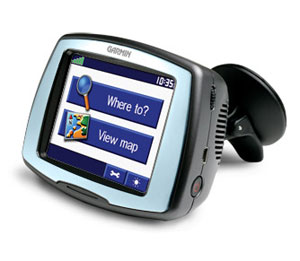 Right now, the UK seems to be completely awash with mid-range GPS navigators, many of which are lurking around the £200 mark. Garmin itself seems hell bent on flooding the market all by its lonesome with a line-up of some 20 different models of all shapes and sizes, prices and feature sets.

The StreetPilot c510 falls neatly into the mid-range bracket, providing basic stand-alone GPS navigation for the UK. The deluxe version adds a couple of niceties though – maps of Europe and FM TMC traffic alerts.

Each version has dimensions of 11.3 x 8.2 x 5.6 cm – on the rear you’ll find the windscreen arm mount and power connector and on the side there is a volume knob, power button and mini-USB connector. The other side holds the SD card expansion slot.

Garmin’s experience at making satellite navigation devices is very much apparent, even in one of its lower end models. Compared to many other similarly priced GPS units, the interface and the speed at which it finds satellites, the clarity of on-screen instructions, and the icons and maps were all a cut well above the rest. A particular strength is just how easy it is to see exactly what you’re meant to be doing, even if you are approaching a tricky junction.

Menu navigation and route planning using the touchscreen is similarly impressive and definitely suited to finger prodding instead of relying on a stylus for precision. Although you are absolutely not supposed to be fiddling with your StreetPilot while you’re driving, I will add that should you fall prey to temptation, it is made somewhat easier by the great quality of the touchscreen.

Two other things immediately warmed me to the StreetPilot c510 as well. Firstly, the suction mount uses a unique ball shaped clip and is a whole lot easier to use than the other standard clip mechanism. If you sensibly choose not to display £200+ of easily thievable electronics in the front windscreen of your car, you’ll find that this is a very sensible design decision.

Secondly, unlike a lot of its rivals, the c510 isn’t based on a Windows architecture so there’s no faffing around with ActiveSync to make updates. This is perhaps a bit subjective, but I think that having a simple ‘update’ button on the CD menu is a much more straightforward way of doing things. And I’ll admit that that I was pretty won over by the fact you can download various symbols to represent your car. I now drive a purple monster truck – yeah!

While I was just going on about the merits of the ball clip on the mounting arm, I didn’t mention that it is also spectacularly let down by the power cable. It is like one of those mobile phone chargers that locks into your phone so you have to squeeze two clips together to make it release its hold. Not much an issue on a mobile perhaps, but when there’s a cable getting wrapped around you gear stick and the passenger seat, it’s more of a problem. And added to that the deluxe version’s cigarette lighter charger has a cable holding the FM TMC aerial, with its own suction cups, so you end up pulling everything off the windscreen while you try and detach it from your car. It’s a real pain.

One area in which the c510 doesn’t compete quite as well as its rivals is in the sheer size of it. It is not only a wider than some, but quite a lot fatter too. In fact it is shaped a bit like an old CRT television. Admittedly, it is nice to look at and it does come with a carry case, which is good, but it would still struggle to fit in an ordinary pocket.

One thing I can’t really comment on is the quality of the TMC and alternative route guidance. Yesterday I found myself actually driving around in search of a traffic jam, however I failed to find anything that was far enough outside the realms of ordinary rush-hour traffic to register as a full blown traffic jam on the TMC. Three things did occur to me at the time though; 1) I’m chasing traffic jams, wtf?!? 2) I’m actually only adding to any other congestion problems at this stage, and 3) the whole TMC thing is probably over-rated. I’m interested to hear your thoughts if you consider it to be utterly essential though – it should help us ascertain if extra cost of the deluxe version is really worth it.

Battery life: up to 8 hours

As a straight GPS unit, the StreetPilot c510 is clearly one of the best of its kind. It is only missing out on a five-star rating because of its bulk, that charger, and a feature set that is a bit less ambitious than some competitors offer. The price is competitive too, Halfords currently have it on offer for £200, which isn’t bad at all.