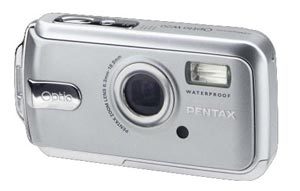 Pentax’s ‘W’ series cameras are built to be more rugged than other compacts; the main feature is the water and dustproof design, which protects the delicate innards against the elements as well as the more raucous variety of indoor activities.

The W20 is really only a basic update to the excellent W10. It now includes a 7.0 megapixel sensor, a higher sensitivity of ISO 1600, SDHC memory card compatibility, Face recognition AF and a new Blur Reduction mode.

Other features remain mostly the same as its predecessor and indeed most other basic compacts on the market. There’s a 3x optical zoom, 2.5” LCD viewfinder, Macro mode (1cm) and a range of scene modes to getting the right shot that little bit easier. 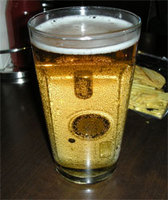 The water-proofing is, of course, the feature that really sets the W20 aside from almost every other compact on the market. And if you consider that one brief moment of cackhandedness or an errant pint could spell death to any normal camera, it seems all the more worthwhile. The W20 is quoted as being able to withstand up to 30 minutes of continuous operation at an underwater depth of 1.5 metres. That means it should withstand pretty much anything you can throw at it (in some cases literally) short of deep-sea diving.

And best of all, it is still easily pocketable. The dimensions are 54.5 x 106.5 x 23mm and it weighs in at 150g. This makes thicker than a lot of new compacts now on the market, but still way smaller than most other water-proofing solutions.

In terms of picture quality, I have always felt that photos taken on Pentax cameras produce slightly more vibrant colours, especially in low lighting, than other makes and the W20 continues that trend. However, the difference is only very minor and in general the picture performance is pretty much average for what you would expect from other 7.0 megapixel compacts.

The main issue with the waterproofing, is that it means that the lens cover had to be dropped completely, presumably because its moving parts would rapidly get clogged up. Some people will undoubtedly be put off as it leaves the lens highly vulnerable to scratches. Dust is less of a problem because, unlike most other cameras, you could basically hose the W20 off if the lens became too grimy. However, it would probably benefit piece of mind if Pentax included a removable lens cover of some sort or, at the very least, a case in the box.

Operating the device is, again, pretty much identical to that of its predecessor and other members of Pentax’s compact range. You have the choice of the ultra-basic ‘green’ mode – ideal for camera noobies or for slightly more advanced users there’s a host of screen modes to suit every occasion and then some. If anything, there are a few too many of these and I think the list could have been made more useable by cutting out a few. ‘Museum’ and ‘Report’ mode seem likely obvious candidates for the chop. Fortunately, for those more familiar with the intricacies of photography, there is a ‘Program’ mode that allows you to set things like White Balance, ISO and Exposure compensation manually.

My main gripe is that so little has changed. The leap from the 6.0 to 7.0 megapixel hasn’t really made much of a difference to picture quality and, if anything, time could have been better spent just tweaking the performance speeds and improving the chassis design to look a little bit more distinctive. Similarly, the enhanced ISO setting really only yields pictures with a lot of digital noise, so you’re unlikely to get anything very useable from this setting anyway.

The price of Pentax W20 ranges from around £220 to £250, which is very similar to that of most other 7.0 megapixel cameras. The only other compact offering the same waterproof feature is the Olympus 770 SW, which is currently just a little bit more expensive. There’s no faulting the W20 in terms of picture quality and is therefore a worthwhile investment for anyone who needs a camera capable of withstanding a bit more extreme conditions than its peers.