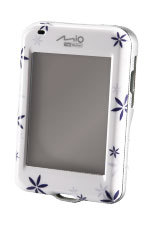 Although GPS systems are slowly starting to appear in handheld devices like mobile phones and PDAs, in the UK at least, Satellite navigation is still very much the domain of bulky in-car units. Mio’s H610 is very clearly aimed at taking GPS out of the car and placing it squarely in your pocket or bag.

It is extremely compact at 22 x 60 x 87mm and weighs in at 166g – very few buttons adorn the chassis as almost everything is controlled by the large 2.7” touchscreen display. For guidance it uses Mio’s own MioMap v3 software backed up by a SiRFStarIII GPS chipset. And to keep you entertained whilst you’re out and about, there also a digital audio player and MPEG-4 video player, and a selection of games. For storage, you can either use the generous 1GB of internal memory or expand further using an SD or MMC card.

The H610 simply oozes designer gadget from every pore – it looks fantastic, sleek and sexy, and even comes with interchangeable faceplates so you can give it more of a personalised look. Despite the small size, its operating speed is pleasing swift and a lot faster than you’ll get with low cost, small-scale Sat Navs. Its vast wealth of features also sets it apart from pretty much anything else on the market, with the one exception of the newly released Fujitsu-Siemens Pocket LOOX N100.

For music and video playback, the H610 uses MioPlayer software, compatible with the MP3, WMA and WAV audio, and MP4, AVI, QuickTime, ASF and WMV format movies. The sound quality is perfectly adequate even if it won’t quite blow you away, but video playback is a bit better – on full screen you can hold the handset horizontally to get a decent sized widescreen display that is easily good enough for viewing on the move. As long as you’re not running the music player and the map software all at the same time, the battery life is ample enough to keep you going for a good day, but even whilst navigating, you still get a healthy four and a half hours of run time from a single charge.

You get four mini games installed on the H610. They’re actually a whole lot better than I expected and are great for idling the time away – for example, when you’re supposed to be writing a review. Doh. You get four to choose from: ‘Fireball’ (kind of an enhanced version of Breakout), Gems (basically Bejeweled), Plumbing (more fun than real plumbing I expect) and Flux (completely unrelated to dysentery, luckily). The touchscreen interface is nice and precise, so it works out well for these games.

I’m not a huge fan of the MioMap interface as it uses a menu system that still feels pretty unpolished. The menu hasn’t really been optimised to suit quickly changing from in car navigation to on foot and new users will probably take some time to learn their way around because it tends to tuck away all but the most basic functions behind several layers of menus. Apart from that one gripe though, the system is just as effective at helping you find your way around as on any other Mio product.

A slight disadvantage of the small size is that the device tends to lose signal very easily and, unless you have remembered to mute it, goes on to announce that fact quite loudly. Having some bloke shout “GPS signal lost” from inside your pocket isn’t exactly the coolest way to make an entrance…

There are a few other bugs lurking around the system too – although you can use the potentially very handy remote control section with the music player, the device doesn’t always react to your button presses immediately. This means that you’ll end up playing through about ten seconds of a track, then have it skip on as backed up commands come into effect. The Shuffle function is also a bit iffy and doesn’t do a particularly great job of shuffling – a real shortcoming.

The price tag of £279.99 does seem a tad expensive for a GPS navigator, but the H610 is so brilliantly fleshed out with other features that I think it is well worth the outlay. Although sat nav systems have been offering more pedestrian friendly features for some time, Mio is the first manufacturer to truly match the hardware to the concept and the result is a truly gorgeous little gadget.

It was only after a week of using it that I spotted a section in the press release that stated “designed especially for women” and left me feeling slightly emasculated. Don’t let that put you off too much though – there’s not one hint of pink in here. In fact, with Valentines Day right on the horizon, it would be well worth picking up one of these for your better half, then stealing it away the moment her back is turned. Who said romance is dead?