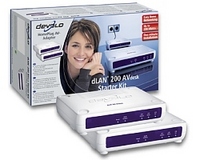 WiFi is great and everything, but even the fastest wireless networking standards can still be baffled by the presence of thick walls and architectures that don’t allow you to conveniently place a WiFi source in the exact centre of a home. Even in a relatively small building, you can still find areas of patchy reception, and things like microwaves can confuse it still further.

HomePlug is an alternative to WiFi – admittedly it does still involve wires, but as it uses the existing mains power cable in your house, it is a much more appealing alternative to trailing reels of network cable about your home, or the more costly alternative of getting it hard wired into the walls. German company devolo has already been manufacturing a selection of HomePlug products for some time, but the AVdesk is an upgrade to the technology as it now offers network speeds of up to 200Mbps.

Undoubtedly, the greatest strength of the devolo AVdesk is the sheer ease of installing it. While it seems a bit cliché to say it is as easy as plug and play, all you really need to do it plug it in and, errr, that’s it. Okay, I did have to reboot my computer once, but I think that might have just been the computer rather than the AVdesk.

The enhanced speed of the AVdesk has one very obvious function -streaming High Definition video. To test out the enhanced speed we used VLC with some 720p resolution videos. The framerate was very stable and, apart from some early artefacts, the images remained clear from there on in. This is something you could barely even dream of doing over WiFi without some extremely hardcore compression techniques and even some of devolo’s older, 85Mbps devices weren’t up to the task either.

Admittedly, even with its speed hike, the AVdesk does still struggle with streaming full blown 1080p content during our tests. However, streaming full HD is a pretty unusual demand to make on a system, so I think it’s fair to forgive it this shortcoming in light of its ability to successfully stream lower-bandwidth, 720p video.

It is clear that devolo has tried to improve the visual appeal of its devices, but they still fall slightly short of ever realistically being called ‘stylish’. Although the white design of the AVdesk does look a little more alluring than the blue plastic of the earlier models, I still think that the ordinary wall plug versions are nicer simply because they tuck away out of sight a lot better. There’s no performance difference between the standard AV edition and the AVdesk of course, so unless you particularly need an extra few feet of cabling, the AV plugs are definitely the better option.

Another small grumble is that the new AVdesk products were unable to connect to my network through the older HomePlugs, but that isn’t a huge surprise.

‘Quality of Service’ function to prioritise voice and video data

For reliable, stable streaming and transmission of audio and video content throughout a home network, devolo’s latest high-speed network products still remain a superior alternative to WiFi and still cut out those unsightly CAT5 cables. Prices range from about £150 up to about £170 depending on where you shop, which does still put it at the pricier end of the market, but on a par with its few other rivals, such as Netgear.