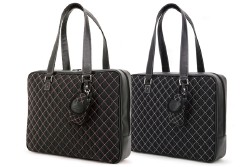 This is probably more suited to Shiny Shiny, but still. Mobile Edge were at tonight’s Digital Experience event in Las Vegas. The company makes all manner of carry cases, bags and mobile lifestyle gadgets, but I was taken with its Monaco bag, which is aimed at women, and has a quilted Microfibre outside, and a “rich buttery-soft poly suede interior”. Nice.

It holds laptops with screens of up to 15.4 inches in size, and doesn’t look anything like a laptop bag – partly to win style points, and partly to protect against thieves. More weird is the Wireless Security Shield, which is a Zinc-lined pocket that fends off hackers.

“If you put a cellphone in there, it’s protected from blue snarfing, bluejacking, all that sort of thing,” Lewis Lustman, director of marketing, told me. “It’s impervious to any sort of telephonic waves, and it’s also cool if you’re in a meeting, drop your cellphone in there and it won’t ring during the meeting.”

Er.. so it blocks you from getting any calls, which isn’t great if you forget that you left your phone in the pocket. Still, despite me not being an authority on lady-bags, it looks pretty swish to me.

Mobile Edge also had its SecurePack on show, which it claims is the only secure computer rucksack on the market. When you’re wearing it, no zips or pockets are exposed to nefarious thieves, even if you’re on a crowded train or tube. It holds laptops with up to 17-inch screens, and has a dedicated pocket for your iPod or MP3 player.