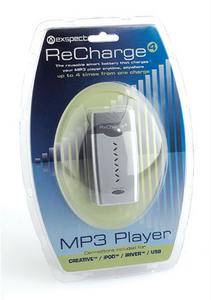 There’s few things more frustrating than having your Mobile/MP3 player/Handheld console run out of juice when you’re on the move – especially when you’re in an airport several hours from home, surrounded by electric lights, X-ray machines and tannoys, but with not one single plug socket available for your use. And given the sheer number of batteries that need charging in your ordinary everyday gadgets, this is going to be an increasing problem.

Unless you have an Exspect Recharge4, that is. It is so named because it will recharge one of your gadgets four times from just one of its own charges. The most obvious use for this is the iPod but it has also branched out to support mobile phones, handheld consoles and pretty much anything else that uses a mini USB charger. The review kit I have is the iPod version, but it actually comes with both an iPod plug and a selection of mobile phone adaptors and a mini USB plug and a standard USB plug, which is pretty generous.

The Recharge4 has dimensions of 84 x 41 x 23mm, roughly the same size as a ten pack of cigarettes, and weighs in at around 360g; it isn’t exactly going to be a problem to carry about. It only has one button, labelled C-Check/Start, which unsurprisingly starts up the charging and/or lets you know how much juice there is left. This is indicated by eight green lights on the front. You can probably tell it isn’t exactly a complicated tool.

In my tests it performed exactly as promised, even when I mixed and matched by charging my mobile, my iPod, a GPS device and a PSP. Further more I actually squeezed a fair bit more than four charges out of it.

There is little to find that is bad about the device itself, or its performance. But if I had to complain about something it is that it is very easy to lose the various adaptors you need for your different gadgets. If there could be a single attachment that held a few of these at the same time that would certainly help, but it’s not really a big deal.

Recharges four times from one charge

The Recharge4 costs £40 (although you can pick one up for £30 if you shop around) which is maybe pushing towards the pricey side, but if you do frequently find yourself cut off from access to mains power, it could prove to be completely indispensable. It is well made and worth the outlay, and, unless you’re prepared to put in a lot of elbow grease there’s little in the way of alternatives.