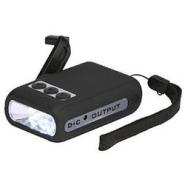 Picture the scene – you’ve just emerged from your tent in the Scottish highlands/Lake District/Welsh mountains/festival campsite [delete as appropriate] faced with gale force winds and freezing rain for the third day on the trot. All you want to do is blackmail one of your mates into picking you up so you can ward off the trench foot and hypothermia with a nice brew. Only problem is that your phone’s battery just died leaving you with a long trudge back to civilisation where you can find a wall socket.

That is unless you have a Eurohike Wind up phone charger, which lets you convert some elbow grease into power for your mobile. Plug the accompanying cable into your handset and wind like crazy for a few minutes, and that should give you enough juice to get a message out. Furthermore it has a built-in LED torch in case it gets dark while you wait.

It is quite satisfying to watch your battery bar increase as your hard work is transformed into precious electricity. That said, it does take a fair amount of effort to build up charge – about three minutes of winding translates into just a few minutes of talk time. I naively considered testing how long it would take to charge a battery to full, but I think the effort might have cost me the use of my arm. However, in an emergency, a few minutes of effort will undoubtedly be well spent. Keeps you warm too.

The built-in torch is actually surprisingly handy – it charges very quickly, retains its charge for a fair few minutes and, more importantly, is reassuringly bright. You even have a choice of brightness settings – using 2, 4 or 5 LEDs.

The unit itself is roughly comparable in size to a pack of cards, although it is a little narrower and fatter. The outer edge feels slightly rubberised which helps you to maintain a grip while you wind.

The device comes with a selection adaptors to suit different makes of phones including Nokia, Sony Ericsson, Motorola, Samsung and Siemens. It is by no means an exhaustive list but that is in part to do with the mobile manufacturers insisting on changing their charger design for no good reason after a few years. I’m especially looking at you Nokia and Sony Ericsson. Grrr.

The device might still have been improved by a wider range of charge adaptors. Not necessarily for phones though – I’m particularly thinking of something compatible with handheld GPS units. A mobile phone is all well and good, but if the worst happens and your GPS gives up the ghost you could be better off knowing where you are when you call for help.

The Wind up charger could be a really handy tool, especially if you’re keeping it as a back up for emergencies, although just using it as a torch does save you lugging around a load of spare batteries.

I expect these will be filling a few stockings this year. You can pick one up for a tenner from Millets – they are available in black, pink or blue.