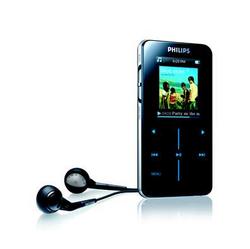 The number of nano clones out there is pretty staggering – unsurprisingly, everyone wants a piece of Apple’s lucrative music player pie, but few manufacturers have had much luck in shaking the iPod’s market dominance yet. However, the quality of rival products has been advancing dramatically, and more so than ever this year. Philips’ GoGear SA9200 is a great example of this – its thin candybar design is immediately identifiable as nano-esque but in contrast to the iconic white, the SA9200 sports a very sleek black finish on the front end.

Its dimensions of 90 x 46 x 8.9 mm make it just a little taller and fatter than the iPod but the screen is a little larger at 1.7”. Other features include a touch screen interface, 2GB of NAND flash memory, MP3 and WMA compatibility, as well as PlaysForSure classification, and 14 hours of battery life.

The touch screen design serves the SA9200 well – it is easy to use and pleasingly responsive. The various back-lit keys light up only when you have the option to use them, which, when combined with the very intuitive menu layout, makes it extremely straightforward to gets things up and running quickly.

The sound quality is impressive too. The player produced some well detailed, clear audio over a range of different bit rate encodings and even the packaged headphones weren’t bad. You also have a choice of nine settings on the 5-band equaliser, or you can create your own setting if you’re a real perfectionist.

The most obvious failing of Philips’ player is the 14 hours battery life. Compared to the nano’s 24 hours, it is a real disappointment – presumably the undeniably smart back-lit buttons are a little too power hungry. However, unless you’re stuck in some particularly unfortunate travel delays, even 14 hours should be enough to serve most users.

Although the touch screen system works well for menu navigation and browsing, its high level of sensitivity does lead to some unwanted track skipping before you train yourself to keep that keypad lock on tight. It’s only a minor niggle really, but one that LG Chocolate phone users will probably empathise with.

Up to 14 hours battery life

So is it a nano beater? Not really, but it does put up a good fight and anyone who prefers to use one of the many iTunes music store rivals will certainly find this player to be one of the best PlaysForSure devices of its kind. It isn’t cheap though – it retails for around £130 – but the sheer style of the back-lit controls and great sound quality do go some way to justifying the extra expense.