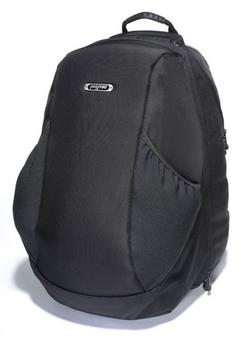 There is a steadily increasing amount of clothing that incorporates iPod controls coming out at the moment, but only a few bags have been given the same treatment so far. Jansport‘s has now joined this exclusive club with the Dreamer, which, along with its smaller counterpart, the AudioPack, has iPod controls built into the right-hand shoulder strap (which Jansport calls LiveWire technology).

A 3.5mm plug, which connects internally with the iPod docking plug and 3.5mm jack inside a special zipped section at the top of the bag, is located at the top of the right strap and there’s an elasticated cable holder above it too, so you can keep your tangle of headphone cable to a minimum.

The oddly named Dreamer has one further trick up its sleeve though, and that’s Bluetooth. A single Bluetooth button adorns the left strap along with a very small LED that acts a basic status indicator. This is powered by a pack inside the bag and requires 3 x AAA batteries. The bag offers a 35 litre capacity with two compartments, a section for your laptop and a number of other zipped sections and flaps to keep your possessions in order.
The good

The problem with integrating iPod controls into clothing and apparel is that it is hard to make buttons that can both withstand the rigours of being exposed to the elements and still act effectively as buttons. The LiveWire manages to tackle that problem well though – the controls are covered by a neoprene section and, although they feel kind of squishy, you don’t end up struggling to get button presses to register or have your track suddenly skip as you brush past passers-by.

One of Dreamer’s main selling points is the AirCore technology that is designed to spread the weight naturally across your shoulders for extreme comfort. Or something. Either way, the Dreamer is a really comfortable bag to lug around – even when full of laptop, power supply, books and other crap. Looks wise it ain’t bad either – it is only available in black, which suits me fine because that goes with most things, and it fits around your body snuggly so at least it doesn’t look like your carrying all your most valuable electronic possessions in one conveniently thievable container. The iPod controls are similarly low-key and just look like a logo from a distance.

A bit of a weird one this – I can’t work out why Jansport has positioned the 3.5mm plug on the right-hand shoulder strap. As a rule I tend to have my headphone cable feeding towards my left ear first, and I don’t think that’s an unusual decision either. For example, my normal set of headphone’s have a single cable that feeds into the left cup and my mobile’s earphone’s have shorter cable on the left, with the longer one on the right to feed round your head.

Having the plug on the right doesn’t detract from the performance or anything but it does lead to more cable tangles, which the LiveWire system was partly designed to reduce. It is worth noting that the standard iPod earphones don’t suffer from the problem as much though.

The Bluetooth controls are a neat addition certainly, but I do have a couple of gripes. Call quality on the receiver’s end was fine and the mic does a good job of picking up your voice without you having to speak directly at it. However, the sound quality coming through the speakers tended to be a bit scratchy and low quality, which is a bit of shame. The performance of the Bluetooth button was a bit sporadic too. Sometimes it would connect and disconnect perfectly, but at other times I spent some minutes just trying to coax it into working at all. Such are the perils when one button controls four different functions.

The Jansport Dreamer is undoubtedly a big leap forward in baggage technology – but here’s the real stinger: it costs £199.99… That just seems a little too much to be spending on, err… a bag, y’know. The ladies of The Bag Lady might disagree with me there though.

For something a bit more reasonably priced, it is well worth checking out the Jansport AudioPack. It has the exact same LiveWire iPod controls but is slight smaller at 24 litres and only has a single compartment. You lose the Bluetooth of course, but then it will only set you back £69.99 and it looks and feels very similar to the Dreamer.

You can only get the Dreamer from Selfridges currently, but the AudioPack is also available from John Lewis and Harrods.