Samsung Galaxy S21 shipments will be ‘lower than S10’

8 in 10 drivers think electric cars are too expensive

5 ways to ensure online security in 2021

With the snow falling up and down the country, so too has a spate of snow-coloured white smartphones. The latest to get the white-washed look is the HTC Sensation XE. Heading out into the wild on February 20th, Clove have…

Think Microsoft are having all the fun re-vamping their console hardware over the summer? Think again; Sony have just dished out details on a wave of new PS3 models, with new colours and hard drive sizes making up the…

There have been so many leaks relating to the new model of the iPhone that if they all turn out to be the real deal, there hardly seems any point in Steve Jobs going through the motions of a glitzy…

Audio specialists Klipsch have found their latest Image S4 and S4i headphones so popular,that they are now offering them in revamped white colour. “These headphones are in such high demand that we thought a new exciting colour option would further broaden…

Bought a Macbook recently? Start kicking yourself, because Apple has just announced a sneaky upgrade to the 13″ white MacBook which pumps up the capabilities of the diminutive, but popular, machine to the standards of its unibody compatriots.

The machine pumps the processor up to a Core 2 Duo with faster 1,066MHz FSB, a doubling of RAM (2GB, rather than one) and a considerably nicer integrated graphics unit. Bluetooth’s upgraded from 2.0 to 2.1, too.

It hasn’t hit the UK store yet, only the US one, but I suspect us Brits will get the same upgrade within a matter of days. In the meantime, if you were planning a purchase, it might be worth waiting a day or two until the UK store updates too. Price is still the same. 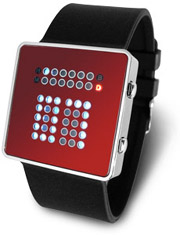 We always end up mentioning the new developments down at the insane offices of Tokyoflash, thanks to their regular output of exciting watches with interesting looks.

Tibida’s particularly striking, thanks to featuring 42 little white LEDs. Which, it is rumoured, well-trained wearers are able to interpret to use as a rough guide about what the time is. Or, at least, what the time is near.

Fortunately, the new Tibida comes with a handy visual guide that explains exactly how you’re supposed to tell what the time is with it.

Here’s how it works: