Which? calls for improvements to Electric Vehicle charging networks

First of all, it's convenient. And secondly, this is not the only advantage of a robot vacuum cleaner. 1. Mobility The most obvious advantage of any cordless model: you can freely move around the whole apartment with this vacuum cleaner. It doesn't matter where your electrical outlets are located. The vacuum cleaner has a built-in…
29th December 2021 Tech Digest Correspondent News, Robots

Dyson says it will invest an additional $3.67bn (£2.75bn) into new technologies and products over the next five years, according to the BBC.  It will use this investment money to fund research in robotics, next-generation motor technology, smart products, machine learning and material science.  The company will also focus on the commercialisation of its solid-state…
27th November 202027th November 2020 Chris Price Home Appliances

Dyson, the British engineering firm that revolutionised the vacuum cleaner, are now looking to overhaul the humble tap with the introduction of their new Airblade Tap system. Costing £26.9 million to develop, the tap uses an infrared system to track…

There are some household tasks that require a little creativity; cooking a top-notch dinner for instance, or decorating a room. Others seem solely meant to inspire tedium. Doing the vacuum cleaning would be one such task. So let a servile…

As far as school projects go, I cant think of anything cooler than building a gadget that turns you into a real-life Spiderman. But that's exactly what UK schoolboy Hibiki Kono has done, as he has amazed the world…

Normally, we wouldn’t bother reporting about the release of a hand-held vacuum cleaner. They’re just not that exciting. But James Dyson – the man who revolutionised the vacuum cleaner and washing machine industries – has claimed that the DC 31’s motor is the “fastest motor in the world, by a long stretch”.

104,000 revolutions per minute make the motor ten times faster than the one found in a Boeing 747 and five times quicker than an F1 car’s motor. I bet the plane and the F1 car could still beat the vacuum cleaner in a race though.

Dyson has stated that the DC 31 is just the first of a long line of products that will include the new motor. He said: “It’s radical. It’s completely different technology. We are the only company in the world producing a switched reluctance motor.” 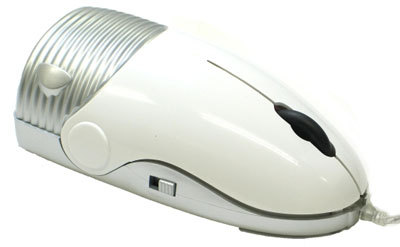 Do you ever spend your time worrying about the amount of dust gathering on your desk? Well, you’re the kind of person who might just buy the Vacuum Cleaner Mouse.

On Wednesday evening, Alex and I spent all night vacuum cleaning. Yes, it’s what we do on our nights off from Shiny Towers. We’re simply wiiiiilllld.

Ok, technically, it was a night ‘on’, as we were at a Dyson event, getting hands-on with their new DC16 model, which was made in collaboration with the Japanese fashion designer Issey Miyake. Both Issey Miyake…

I'm still convinced that the nefarious brains behind the current generation of robot vacuum cleaners are trying to sneak them into our homes, ready to enslave humanity at a moment's notice. Or just revolt by making our carpets a bit dusty and sucking up the cat's tail, at least.