Telecoms companies urged to improve customer service: where to start?

The number of Google searches related to taking up tennis or receiving coaching in the sport has increased sharply during Wimbledon. The internet giant has revealed that the number of searches for “tennis coach” has more than trebled during the Championships. Searches for “start playing tennis” have also more than doubled, the company said. (Google/PA)…
11th July 201912th July 2019 Chris Price Google, News

Whether you believe in it or not, technology in sport is a hot topic these days with regular and countless calls for more and more computerised systems to be used across the major sports, and no doubt, in the less known sports as well. The word technology can lend itself to many different subjects and…
14th July 20177th March 2021 Chris Price Gadgets, Sport

The Wimbledon tennis tournament will for the first time have matches available to be live-streamed online through YouTube this year. With the tournament kicking off today, it's a great way to cheekily keep up on the on-court exploits of Murray…

I'll level with you; I'm not a massive fan of motion gaming. Waving your arms around over your head, jogging on the spot and generally making a complete arse of yourself in front of all who may be present;…

IBM has been working at Wimbledon since the dawn of time and they’re upping their tech ante in 2009 with a trio of mobile phone apps to help you, me and everyone we know follow the comings and goings at SW19, mostly via Twitter.

The pick of the bunch for me is the Seer Aggregator which is essentially a specific Twitter channel beaming straight to your phone. IBM will have a crack team of tweeters in and around the Lawn Tennis Association HQ offering real time info on the games, the scores and anything from queue lengths, seat availability and the general atmosphere too. Some of these sources will include the commentators and the players themselves and I can’t wait for the first “You cannot be serious!” tweet from Maccer.

The second is a little more “expected” shall we say, as we’ll expect a slew of World Cup 2010 themed bits and pieces next summer. No word on how much a Wimbledon iPhone app will cost – I’m thinking free – but it’ll bring all the scores and draws straight to your phone while you sit sweating in a hot city office all too far from the strawberries and cream of South-West London.

On the plus side, it’s probably not going to sing Summer Holiday at you when rain stops play – at least, you’d hope not.

The most ambitious of the three is unlikely to be available to anyone but VIP guests this year. It’s an Android specific app designed to run on the G1. It uses the handset’s in-built compass, GPS and camera to identify buildings at Wimbledon and provide real time information on what’s going on inside them.

The footage of what you point it at will stream directly to a database which identifies the image and reports with all the kinds of detail you’d expect from the Seer Aggregator plus a little bit more too. It’ll work on everything from courts to restaurants.

Sounds a little on the gimmicky side but certainly worth a go if you’re lucky enough to have one thrust into your hand.

It’s probably too late to get tickets to the summer UK tennis extravaganza but, if you’d like info on where to stick your sleeping bag/jump the fence, you’ll find it all here.

Good old Andy Murray. He gave us a few moments of hope, before Bravely Crashing Out At Quarter Final Stage (TM) as British sporting heroes tend to do.

If you want to forever own a piece of sporting nearly-history, you can – Andy and war injury charity Help for Heroes have teamed up to flog one of his racquets on eBay…

Able to lift 1,000kg and with a reach of 3.2m, you could say the KUKA robotic arm is being put to waste when wielding a tennis racquet or sword for an intense Wii session. In the video above, you can see a couple of chaps controlling the KUKA with a Wiimote, which has been hacked with some light pattern recognition so it’d duplicate their arm swings.

The instructions on how to create a Wiimote controlled KUKA are over on their site, but first you’ll need to cough up a fair bit – here’s a second-hand one on eBay for $10k… 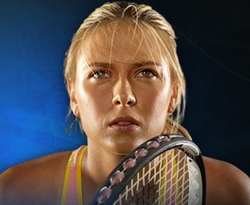 Sony Ericsson has found someone new to hold its handsets – Maria Sharapova. 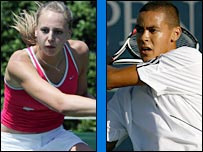 Beware, Bebo/Facebook/MySpace users, it seems there’s an international move led by employers, cracking down on their minions by spying on them through their social-networking sites.

Following the story yesterday about the Nintendo employee fired for keeping a blog, it’s been publicised today that two of Britain’s brightest tennis stars, David Rice (the second-best British junior) and Naomi Broady (the national Under-18 champion) have both been suspended. The Lawn Tennis Association…

Wimbledon has kicked off this week here in rainy London, and whilst wearing my white Ralph Lauren-designed Wimbledon blazer today in support, I thought we’d take a look at what gadgets the man of today, Tim Henman, should be decking himself out with in order to flog everyone and get the famed trophy.

1.) Brando Wii Sports Wiimote extentions – an obvious piece of kit for Henman to splash the cash on in order to improve his game, the tennis peripheral slots onto your Wiimote and gives you that authentic tennis experience. Considering the dismal weather of late, I’d be willing to bet he’d rather practise indoors on Wii Sports than outside in the rain. Poor boy….