If you're the sort of person who keeps a track on your carbon footprint with every carefully weighted step, you may want to have a look at Proporta's latest Smart range of eco-freindly smartphone cases. With a strong focus…

It gets pretty windy in Norway apparently. Well, windy enough for On Office's idea for a city built within wind turbines not to sound completely ludicrous anyway. The concept here is that with turbines growing in size to accommodate our…

Telehouse is a company based in London’s Docklands that runs massive datacentres providing servers and other network gear to major companies.

It’s building a new one – Telehouse West – that’s costing $180 million, but the carbon footprint for such a facility is absolutely massive. Tonnes of heat is generated and the cooling systems involved have to work extremely hard. The company realized that the heat could be reappropriated for use in local homes.

As a result, the company’s been able to generate up to nine megawatts of power for local homes – the equivalent of boiling 3,000 kettles continuously. It’s the first major UK datacentre to implement such a strategy, and the first datacentre to gain planning permission in London since strict sustainability rules were introduced.

In the video above, Lucy takes us through Asus’s all-new, very green, energy-saving Bamboo laptop. It’s made almost entirely of recycled materials, and everything in it can be recycled after the laptop becomes obsolete. It’s a sustainable laptop, if you will.

Northern Ireland has just surged ahead in the sustainable energy world-saving race, thanks to the efforts of Harland & Wolff – the very same Harland & Wolff of Titanic fame.

The shipbuilder has engineered what it believes is the biggest tidal power system in the world today, with the its SeaGen setup capable of pumping out 1.2 megawatts – enough to keep the PCs and TVs on in around 1000 homes… 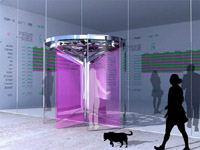 Continuing today’s impromptu self-powering theme we have this from Fluxxlab. It’s a method of generating power for your home – or someone else’s office – by fitting a little charger to a revolving door.

So as you and your gerbil-like friends and employees turn the door, a flood of free electricity charges up all your batteries and keeps your stuff switched on for free…