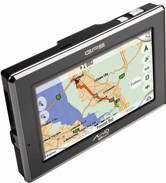 You can always tell when we consider a product we’re writing about just a tad bit boring, as we minimise the size of the picture and shove it off to the left like so. Sadly, 450pixels-wide pictures of GPS systems just don’t work as well as iRobot ConnectRs.

Mio’s latest GPS navigation device, the C720t features a digital camera – 2-megapixels to be exact – which allow you to embed GPS coordinates into an image and help you find your way back to the location as if it were an address. Navigadget, the site where we stole this story fromare kindly linking back to, claim…

Last night, Navman debuted their entirely new sat nav system. They’ve made so many improvements it was like Kim’s game just trying to remember all the new features on video. Susi has a bloody good go though, click below. And if you want all the details, check out this post here…

One of the themes at this year’s 3GSM show in Barcelona was mobile navigation, buoyed by the fact that GPS is making its way into mobile phones, along with the mapping and applications to make use of it. Naturally, every company in this area reckons mobile navigation’s going to be huge.

5px; float: left;"/>Those nutters over at Navman obviously weren't content with compiling a list of the top ten places where the sat-nav system can take you for Valentine's Day, they've only gone and sent a husband-and-wife team off around…

Ah, February 14th. The day when you deluge your loved one in flowers, chocs and perfume, then whisk them away on a romantic date. Or just order a Chinese. But if you're stuck for ideas about where to take your…