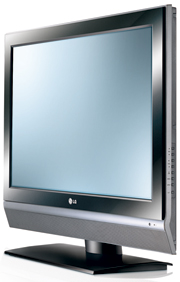 For those of you into your pause and play TV, LG also had new 160GB DVRs with dual digital tuners on display. Each will naturally allow you to watch one program while recording another. They’ve got Freeview Playback Certification from the UK’s Digital TV group, so you can record subtitles and closed captions, in addition to video and audio, as well as intelligently schedule recording times in case a TV programme over-runs. 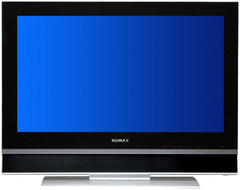 Last week we reported that Humax has received Group 2 Freeview Playback certification for its DTRs, and now LG has also received certification, for its LCD and plasma Time Machine TV range.

LG claim that it’s the first company to receive such certification – presumably they mean for TVs otherwise Humax may have something to say about it.

Not that we really care who’s first – it simply means that more equipment has attained one of the latest digital TV standards, and so should improve consumers’ Freeview experience.

Susi and Alex demonstrate the user and eco friendliness of this “Freeview Playback” certified device with a 250GB hard drive.

Humax has once again upgraded its PVR-9200T Freeview PVR, this time renaming it as the PVR-9200TB.

It claims to be one of the first Freeview Playback digital TV recorders on the market, sporting a 160GB hard drive, and comes with a number of nifty features including schedule tracking and auto-buffering.

It has two tuners, enabling two shows to be recorded, or one to be recorded while another is being watched live. Recording and scheduling is handled via the eight-day Electronic Programme Guide.