Google are updating the way their search engine works, bringing a new "semantic search" update that should lead to better search results based on a better understanding of what words actually mean. Google's search executive Amit Singhal said that…

After a few years of being Jeeve-less, search engine Ask.com has brought back its iconic butler following, the company claims, “public demand”. The company told Tech Digest that research has shown that users “missed his friendly, human, touch”.

Jeeves will be returning in 3D, given a makeover by Framestore – a company that worked on The Golden Compass and Chronicles of Narnia. He’s also got some new threads, courtesy of Savile Row tailors Gieves and Hawkes. They do rather make him look more like a banker or a politician, though.

Jeeves was originally inspired by the butler to PG Wodehouse’s “Wooster” character, which has come to represent the stereotypical English butler. He left Ask.com in 2006, but Ask.com’s traffic hasn’t exactly skyrocketed since, which is presumably the reason behind his resurrection.

The internet is too big. There’s simply too much stuff on it. In 2006, an estimate of how much put the figure at 40 Petabytes, which is about 38000000000 short novels. There’s a lot more than that today, and Microsoft’s innovation labs are trying to work out the best way of sifting through it.

Recommendations engines can run in lots of different ways. You can look at people’s interests and try and match those up with content, which is a bit of a hassle. You can use the wisdom of the crowd to predict based on what other people have consumed next to each other, which is a bit better.

But what Microsoft is doing takes things a step further – they try and work out your mood, see what other stuff you listen to when you’re in that mood, and predict things that way. They also tap into your network of friends – who you presumably have common ground with – to try to work out what stuff you like.

As with any recommendations engine, the more you put in, the more you’ll get out. Microsoft doesn’t claim, therefore, that this is going to work perfectly out of the box. Instead, it’ll get better the more you use it, and ties in with Microsoft’s massive social network around Windows Live Mail (Hotmail) and Messenger (MSN).

The project’s still at an early stage, so it’s difficult to judge whether the company will be able to pull off something as effective as Last.fm’s music recommendation engine. Let’s hope, though, that something comes off it, and the stranglehold that the media holds over mainstream taste can be eroded.

The Zoom Bicycles DIY engine enhancement kits come with anything from a 49cc to an 80cc engine to pop onto your bike yourself and eliminate all that tiresome pedalling, but the catch is the weight – the motor adds around 19lbs (8.6 kilos to you Euro-people) to the weight of your bike…

Welcome to part three of Which Tech Are You! This week, given Ask.com’s remarkably undrastic relaunch, we have a gaggle of search engines for you to become. Are you the calm, serene, but world-dominating Googleborg? Or are you feisty Yahoo!? Find out over the jump…

We’ve seen the phone/oyster card hybrid, and the barcode scanner/phone hybrid, and we’ve long had mp3 cameras and cameras built into our phones. Enough? Not for Japan. Their attitude is “let’s see what else we can cram in there!”. They’ve put your car key into your mobile. At the moment it only works with Nissan vehicles, but it can remotely lock or unlock your car, as well as starting or stopping the engine. It’s not on the market yet, but they’ll be demonstrating it at the CEATAC conference in Tokyo on Sept 30th.

We must try very hard not to refer to the Squirt 2 jet-powered boat as a “death trap.” Every time we call an odd and dangerous-looking invention a death trap, the inventor pops up and gets quite angry about it being labelled as a death trap.

As of yet, no one has died during the testing and creation of the Squirt 2 Turbine Jet-Boat so, for all intents and purposes, it is entirely safe. You may well emerge totally alive and unscathed from a trip on the aluminium-hulled jet-propelled speedboat that generates 1370 horsepower. Here it is showing off by firing up its engine…

Who would hand in a bit of rocket? If I found a bit of rocket, it’d be up on the mantelpiece the same day. Regardless of health implications from cosmic radiation or half-melted fuel cells.

The man in questions is James Stirton. The rocket part in question is unknown, as James has been on the phone to NASA to try and find out exactly what it is he’s just…

Those kurazy comedic chaps, Dick and Dom, are the latest ‘stars’ to be cuddled under the big feathery Microsoft wing, as they’ve lent their name to a microsite launched by the big M, BigSnapSearch.

When used as a normal search engine, it gives users the chance to win prizes such as paintballing excursions, Virgin vouchers, and even a holiday for two to Richard Branson’s Virgin getaway, Necker Island. 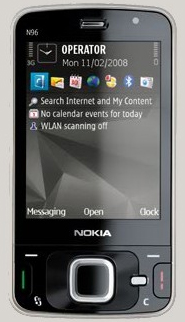 Announced today, Nokia is to roll out Google’s search engine across many of their handsets, predominantly yesterday’s new N96, N78, 6210 Navigator and 6220 Classic models.

The search engine will be integrated into their Nokia Search application, which already offers easy access to the web, and the ability to search content on the actual handsets.