Nintendo's 3DS console, despite a shakey start when it comes to console sales, was at least delivering in one key department; hardcore games. Whether it was the Ocarina of Time 3DS re-release or the slew of Resident Evil games headed…

I'll level with you; I'm not a massive fan of motion gaming. Waving your arms around over your head, jogging on the spot and generally making a complete arse of yourself in front of all who may be present;…

In something of a shock announcement, Sony have today confirmed that their new motion-based controller, tentatively named the Motion Controller, will be available by Autumn 2010. The controller will detect and interpret a player's movement, precisely transferring gestures as…

A PSP2, featuring a sliding touchscreen and two analogue sticks, will apparently be in the shops in time for Christmas, according to a source quoted by Pocket Gamer. It’ll also be considerably more like the iPhone.

The forthcoming PSP2 will feature a large touchscreen, which slides back to reveal controls. There’ll also be an ‘app store’ equivalent in the Playstation Store, where users download games digitally, as the device lacks support for the dying UMD format.

Full specs and pricing will apparently be revealed at E3 in June, but going after the iPhone seems to be a strange move for Sony to be making, especially as Nintendo is hammering the company with its low spec, casually-focused DS.

Are Sony really trying to out-casual Nintendo? And what will that mean for gamers? I can answer that second question right now – it’ll mean a prevalence of cheap movie tie-ins, iFart applications, virtual pet games and other miscellaneous shovelware. Sony will rapidly lose its hardcore fanbase, instead capturing a smaller part of a slightly larger market. Meanwhile, the hardcore go unserved in the portable arena.

Suddenly, unannounced, Amazon has enabled a casual games download service in the States. It’s got more than 600 available, each costs less than $10, and there’s a try-before-you-buy service available to, where you can play a game for 30 minutes before you buy it.

No sign of anything more hardcore, this is so far just limited to Bejewelled and the like, but if this is a sign of things to come then it could be the shot in the arm that PC gaming needs. Especially if recent figures suggesting that half of PC game purchases are digital is true.

Virgin Mobile has decided that its customers deserve cheaper access to the mobile Internet and has introduced a new tariff for moderate daily surfing.

The “Casual User” tariff, available to both contract and pre-pay customers, costs 30p per day and has a 25MB daily limit (we hope that it’s megabytes, though the press release implies megabits).

This, Virgin claims, is up to three times cheaper than most other networks. In an attempt to prove that, a lengthy and boring comparison chart has been published. I’m not going to mess about drawing you a table of figures, because you’re all more than capable of checking out the competition yourself. Suffice it to say, the deal seems pretty average. Heavy mobile Net users would probably be better off with a higher bandwidth or “unlimited with fair use” tariff, but for those just checking Facebook and a few sport and weather pages, it should suffice.

PopCap Games, the company behind addictive flash games like Bejewelled and Zuma has launched a mobile site to sell games for download directly to mobile phones. Already responsible for many lost hours I’ve spent playing Bejewelled on MSN Messenger, the company is hoping that people will pay a fiver a time to get the games on their phones too… 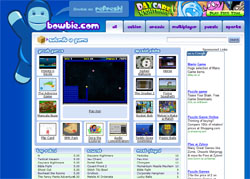 Really, you may as well tell your boss to chuck you out now, with the minimum of fuss. Why? Well, online Flash games are a notoriously addictive way to fritter away your working hours, yet the thing that stops most of us from being sacked is that there’s too many of them to choose from. It’s hard to find the good ones, so we end up getting some work done after all.