Halo 3: Recon! It sounds like a joke. But it isn’t. Halo 3: Recon is the result of all that extremely tedious viral marketing nonsense Bungie’s been doing for months now, a game that brings a new character and play style to the dull old Halo universe.

Just announced at the Tokyo Game Show, Halo 3: Recon is a completely new chapter for Halo 3 that features a NEW CHARACTER and tells the story of events leading up to the start of Halo 3. It is a “standalone expansion” which means a separate game – not a downloadable mission pack for Halo 3. More expensive than that. 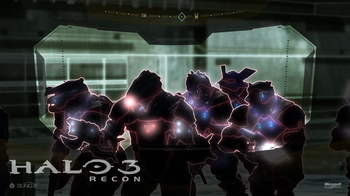 Halo 3: Recon will arrive in Autumn of 2009. The full official explanation as to what Halo 3: Recon actually is and a release date for Halo Wars can be found by clicking the little blue button…

A New Look at the “Halo” Universe
To the delight of devoted fans across the world, Microsoft debuted “Halo 3: Recon,” developed exclusively for Xbox 360 by acclaimed developer Bungie. “Halo 3: Recon” is a new chapter in the “Halo” saga that lets gamers experience events leading up to the epic story told in “Halo 3” through the eyes of a new hero in the “Halo” universe. The standalone expansion, set to release in autumn of 2009, extends the award-winning “Halo 3” experience with hours of new campaign excursions and multiplayer gameplay. In addition, attendees were given an all-new glimpse of the Xbox 360 exclusive strategy game “Halo Wars” from Ensemble Studios. By showing campaign mode for the first time, the live demo provided viewers with a thrilling taste of the revolutionary gameplay and new perspective of the “Halo” universe. Players will be able to enjoy the full experience when “Halo Wars” hits retailers in early 2009.