As the global Force Friday II celebration kicks off around the world, fans in Australia were the first to officially unveil BB-9E, a new dark side character from the upcoming Star Wars: The Last Jedi film. Stores across Australia opened their doors at midnight to welcome fans seeking new Star Wars: The Last Jedi products, and attendees got to…
1st September 20179th September 2021 Chris Price Figurines, Gadgets, Toys

[nextpage title="Next"] The hardest people to buy for at Christmas are the kids. Not because you can't work out what to get them, but because there is TOO much choice. With the help of the UK Toy Retailers Association and its annual DreamToys show, here (in no particular order) are what we think will be…
7th November 201413th November 2014 Stuart Christmas Gift Guides, Figurines, Gadgets, Gaming, Guides, Smartwatches, Top tens, Toys, Wearables

If you don’t want a pair of £99 nightvision goggles, you’re either Swiss or dead. These are part of the British HM Forces foray into the world of “toys” except these bad boys actually give you genuine, green, infra red-assisted night vision at up to 15m.

You only get monocular vision, as you do with the fully-fledged squaddie units, but, of course, in the land blind, the one eyed man is the guy that’ll sneak up, steal your mobile and give you a wedgie for good measure. If you don’t plan on sending your children out into the forest at night to gather wood, then you’ll be pleased to see HM Forces has also released a selection of 10 scale model toys too, as well as a few bits of dress-up costume.

There’s action figures of servicemen from the RAF, Navy and Army and each one is a perfect replica of just how they big guys should look. My personal favourite is the Royal Navy Diver complete with tank and flippers.

The collection has come as a response from the services as a frustration at how inaccurate other military action figures have been. No word as to the level of realism once down to the action pants. Come on, you were all thinking it. Weren’t you? Oh.

Here’s a lady who calls herself Pikabellechu. She claims to be the Pokemon Princess, although we’re not sure Nintendo’s lawyers would agree with that.

Here’s a small celebratory montage we’ve put together of the finest photos. The highlight is the ginger man who grew his beard out to be Chewbacca, plus the grey-haired man who used his natural assets to do a superb Ben Kenobi. The X-Wings let the side down a bit, mind. What’s with the socks?

The entire set is, incredibly, viewable by the general public over on Flickr. We wanted to poke fun, but… it’s sensational…

You ‘d never guess it, but this expertly crafted model is the result of a bubble-bath bottle and a £5 replica model of George Stephenson’s ‘Rocket’… 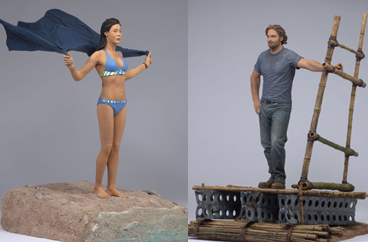 Now, I don’t need much of an excuse to show you these two figurines from the telly show Lost, do I? I’m sure no-one would object to seeing Sun and Sawyer looking decidely delectable in all their plastic loveliness. With the wind whispering through Sawyer’s hair as he gazes off out into the imaginary ocean, and Sun’s taut muscles glistening with sea-salt…oh god, I’ve fallen into a rather embarassing moment of fan-fiction. Lost fan-fiction. Lost figurine fan-fiction. I wish I could quit you, Lost…